Annals of Advances in Chemistry

Archives of Pharmacy and Pharmaceutical Sciences

Annals of Civil and Environmental Engineering

Annals of Proteomics and Bioinformatics

Archives of Biotechnology and Biomedicine

Insights in Biology and Medicine

Journal of Forensic Science and Research

Archives of Food and Nutritional Science

Archives of Asthma, Allergy and Immunology

Archives of Clinical and Experimental Orthopaedics

Archives of Cancer Science and Therapy

New Insights in Obesity: Genetics and Beyond

Annals of Clinical Gastroenterology and Hepatology

Insights in Clinical and Cellular Immunology

Journal of Hematology and Clinical Research

Journal of Clinical Advances in Dentistry

Archives of Pathology and Clinical Research

Insights on the Depression and Anxiety

Clinical Journal of Obstetrics and Gynecology

Journal of Neuroscience and Neurological Disorders

Archives of Surgery and Clinical Research

Journal of Radiology and Oncology

Archives of Psychiatry and Mental Health

Journal of Addiction Therapy and Research

Annals of Clinical Endocrinology and Metabolism

Journal of Novel Physiotherapy and Rehabilitation

Journal of Cardiology and Cardiovascular Medicine

Journal of Sports Medicine and Therapy 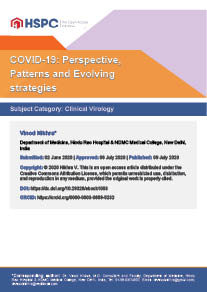 The Global Virome: The viruses have a global distribution, phylogenetic diversity, and host specificity. They are obligate intracellular parasites with single- or double-stranded DNA or RNA genomes, and afflict bacteria, plants, animals, and human population. The infecting virus binds to receptor proteins on the host cell surface, followed by internalisation, replication, and cell lysis. Further, trans-species interactions of viruses with bacteria, small eukaryotes and host are linked with various zoonotic viral diseases and disease progression.

Virome Interface and Transmission: The cross-species transmission from the natural reservoir, usually mammalian or avian, hosts to infect human-being is a rare, but occurs leading to the zoonotic human viral infection. The factors like increased human settlements and encroachments, expanded travel and trade networks, altered wildlife and livestock practices, modernised and mass-farming practices, compromised ecosystems, and global climate change act as drivers of trans-species viral spill-over and human transmission.

Zoonotic Viral Diseases and Epidemics: The zoonotic viruses have caused various deadly pandemics in human history. They are further characterized as newly emerging or re-emerging infectious diseases, caused by pathogens that historically have infected the same host species, but continue to appear in new locations or in drug-resistant forms, or reappear after apparent control or elimination. The prevalence of zoonoses underlines importance of the animal–human–ecosystem interface in disease transmission. The present COVID-19 infection has certain distinct features which suppress the host immune response and promote the disease potential.

Treatment for Epidemics like COVID-19: It appears that certain nutraceuticals may provide relief in clinical symptoms to patients infected with encapsulated RNA viruses such as influenza and coronavirus. The nutraceuticals reduce the inflammation in the lungs and help to boost type 1 interferon response to these viral infections. The human intestinal microbiota acting in tandem with the host’s defence and immune system, is vital for homeostasis and preservation of health and protection from disease states including viral infections. Certain probiotics may help in improving the sensitivity and effectivity of immune system against viral infections. The antiviral therapy is available only for a limited number of zoonotic viral infections. The viruses being intracellular parasites, antiviral drugs are not able to deactivate or destroy the virus but can reduce the viral load by inhibiting replication and facilitating the host’s innate immune mechanisms to neutralize the virus.

Conclusion: Lessons from Recent Viral Epidemics: Considering that certain nutraceuticals have demonstrated antiviral effects in both clinical and animal studies, further studies are required to establish their therapeutic efficacy. The components of nutraceuticals such as luteolin, apigenin, quercetin and chlorogenic acid may be useful for developing a combo-therapy. The use of probiotics to enhance immunity and immune response against viral infections is a novel possibility. The available antiviral therapy is inefficient in deactivating or destroying the infecting viruses, may help in reducing the viral load by inhibiting replication. The novel efficient antiviral agents are being explored.

Enter your University/Institution to find colleagues at HSPI.

Get all latest articles in all Heighten Science Publications Inc journals by country.

Your big support from researchers around the world is the best appreciation from your scientific teams. We believe that there should be no barrier in science and you make it real and this motto come true.

Thank you very much. I think the review process and all of what concerns the administration of the publication concerning our paper has been excellent. The nice and quick answers have been very good I think.

I am very much pleased with the fast track publication by your reputed journal's editorial team. It is really helpful for researchers like me from developing nations. I strongly recommend your journal for publication.

Publishing with the International Journal of Clinical and Experimental Ophthalmology was a rewarding experience as review process was thorough and brisk. Their visibility online is second to none as their published articles appear in all search engines. I will encourage researchers to publish with them.

I hope to ability to make some new investigation and publish in Your Company in future.

"This is my first time publishing with the journal/publisher. I am impressed at the promptness of the publishing staff and the professionalism displayed. Thank you for encouraging young researchers like me!"

You are such a nice person. Your journal co-operation is very appreciable and motivational.

This is to specify that I have had an extensive and detailed interaction with the Editorial team of Annals of Clinical Gastroenterology and Hepatology, USA, lasting over a significant period of time. My interaction has been extremely pleasant, especially with Ms Allie Smith, as I find the communication quite inspiring and crystal clear. The attitude of aforesaid individuals is quite helpful and guiding in pertinent instances. It has been a commemorative journey so far working with the Journal and I hope that the symbiosis will continue, evolve and flourish in the forthcoming years. I wish the journal, related personnel and aforementioned individuals a fruitful, successful run.

We really appreciate and thanks the full waiver you provide for our article. We happy to publish our paper in your journal. Thank you very much for your good support and services.

"This is my first time publishing with the journal/publisher. I am impressed at the promptness of the publishing staff and the professionalism displayed. Thank you for encouraging young researchers like me!"